This initiative by representative Jeff Morris, head of House Technology and Economic Development Committee, is due for voting in a few days by WA reps:

The bill is here:

It says:
(b) Any image of a person taken from any location in the Washington state airspace, when the person whose image has been captured is on private property, the landowner and tenants with a right to occupy the private property have not consented to the capture of images of their person on the property, and the taking of such an image is in violation of the reasonable expectation of privacy of the person. The legislature finds and declares that except as otherwise required by the first amendment of the United States Constitution, the reasonable expectation of privacy of a person whose image has been captured under the circumstances described in this subsection (3)(b) has been violated when the image could not have been captured from outside the boundaries of the property on which the person is located […]

Personally, I’m surprised why politicians rush to vote such initiatives without really gathering data about the new technology.
– I think there’s too much fear about privacy concerns related to quads without understanding what can be done with a small quad like a Phantom
– it seems like it may become illegal to take a picture from an airplane (G airspace) because privacy concerns
– the inovation may be restricted in WA state – with such restrictive laws, I’m quite sure, Boeing, Amazon and many small companies or individual engineers won’t be able to experiment and inovate anymore

I took 2 images earlier today from 100 feet and 50 feet using my Phantom Vision 2+.
The pictues themselves can answer privacy concerns. I doubt somebody can really recognize my face by using these pictures. Please feel free to click on the images to see them at maximum resolution (4384 x 2466 pixels) 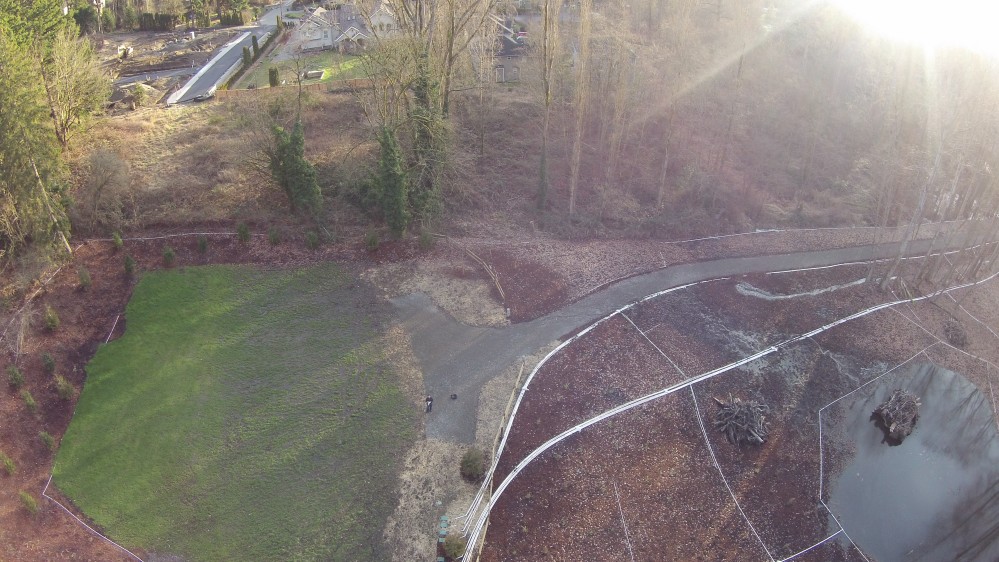 I understand that in the future we can get better cameras.
But privacy can be better protected and enforced, for example, by laws preventing publishing or distribution of pictures from somebody’s backyard where people faces can be recognized in those pictures. We really need to understand what’s the real concern about the invasion of privacy. It will be a waste of police resources to search SD cards from UAVs for privacy violations. Personally, I don’t care if somebody takes a picture of me when I’m in my backyard. Neighbors can get better pictures of my backyard from their own houses (because they can use zoom lens) than flying a UAV over my property.
If I want privacy inside my house, I can use my window blinds. When I’m outside (even in my backyard), I’m aware that I should use common sense (some pictures can be taken from an airplane anyway, no matter what laws are voted). And if a small UAV is 300 feet high, it’s very hard to see it (and hear it).

And frankly, if we’re really concerned about privacy we may ask for laws:
– against neighbors watch programs
– limitation of HOA rules
– invasive TSA searches at airports
– government collection of personal data
– etc

As a side note, the average age of Phantom operators is around 40 – 50 years.
I’m not using my Phantom for close ups. If I want to spy somebody, I’ll probably use very good zoom lens or a telescope. My Phantom is used to take landscape pictures, mountains, forests, ocean shores, beautiful buildings, etc… And most of the time I actually fly my Phantom without even recording, just for the love of flying…

I’m afraid that a bill like actually harms the idea of privacy – by creating an illusion. Bad people don’t care about laws like this. There are even more important laws which don’t prevent spies in their “trade”. Why not just use common sense? It’s pretty easy: treat people with respect as you want to be treated. Don’t fly over somebody’s backyard, and if you do so to get somewhere else, don’t hover there and maintain some altitude.

Privacy and security can be indeed protected by common sense… There’s a fact that new technology may introduce changes in privacy perceptions. Since more and more airplanes are flying over the sky, it’s just common sense that good quality pictures can be taken from airplanes (and therefore, even in your own private property can be “seen”). Years ago, I’ve read a good book about privacy and technology: “The Light of Other Days” by Arthur Clarke…

Unfortunatelly, the politicians are voting on whatever the media is talking about this week and especially on subjects prone to bring extra votes. Is there a privacy concern because what was exposed regarding government surveillance programs? Let’s show the people that we care about their privacy by restricting recreational UAV use. How do we fight for security? We create new TSA rules, we bring full body X-Ray scanners in the airports, we make sure that no liquids (including baby milk) can’t go through security gates, no shoes or belts, just to create an illusion of security by a strong invasion of travellers privacy. Let’s not forget that most of criminals are discovered by old police work, by informations received from citizens. But wait, privacy is super important and let’s make sure that’s absolutely illegal for citizens to fly their small UAVs over private property. It’s a big irony here.